The fact that the NYC subway system has been falling apart for decades is not news!  As a first step in our “doing something about it,”  FFDC’s  Policy Committee presented a forum on subway repair.

The forum, presented at the FFDC’s July 10, 2018 general meeting, was organized by FFDC Transit Subcommittee member Nancy Lang. It featured a panel of three seasoned subway insiders who discussed every issue relating to this problem and concluded by engaging in a lively question and answer session with the audience.  This forum led to the editor of “Our Town,” our neighborhood newspaper, inviting Ms. Lang to write an Op-Ed about the subway repair problem.  It is entitled “A Light At The End Of The Tunnel?” and appeared in “Our Town”s  7/26/18 - 8/1/18 issue.  You can access the article — which includes a brief summary of FFDC’s subway forum — here. 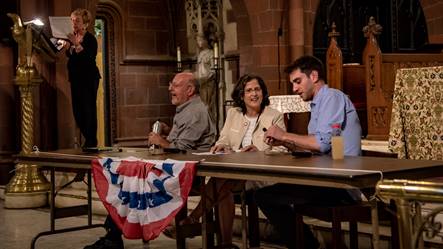 Here is the full text of the article:

A few incontrovertible facts about our subway system: it’s the transit lifeblood of this city; it’s old and decrepit; and just about every one of its close to six million daily riders loudly and regularly deplores its service as undependable, inadequate and infuriating.

Misguided subway management, poor financing, diversion of funds to other projects, and the cost of repairs necessitated by natural disasters and terrorist attacks have depleted the MTA’s coffers. Maintenance of the subway’s infrastructure has been neglected, and we have inherited the results.

So what can citizens do about the state of the subway? Four Freedoms Democratic Club (FFDC) of the Upper East Side and Yorkville is tackling the problem with education. On July 10, the club hosted a transit forum featuring Council Member Helen Rosenthal, transit economist and activist Charles Komanoff, and real estate analyst and journalist Stephen J. Smith. The panelists touched on all of these issues and more.

Among the subway’s principal ailments is its seriously impaired signal system. Panelists discussed that the system dates back to the Truman administration and has been only intermittently repaired. Because of this, a train’s operator can determine only in what section of the track the train in front is located, but not that train’s precise location — meaning an operator must always keep a train at a “safe distance,” resulting in slow, stop-and-start trips and the subway’s worst on-time performance record in decades. The MTA started upgrading signals 20 years ago. It has installed ultra-wideband radio devices along test tracks on the F and G lines but cannot even confirm a timeline for this technology’s testing. It has also installed more sophisticated signal equipment — Communications-Based Train Control — but on only one line, the L.

Why the delays? Money and politics are the usual culprits behind slow progress. Essentially the same issues that caused subway problems 50 years ago are behind today’s problems: hugely inflated construction costs with no-bid or restricted-bidding contracts, lack of funding, misguided prioritization and political infighting.

A high point of the Democratic Club’s panel discussion was the spirited exchange between Komanoff and Rosenthal about the chicken-and-egg nature of subway construction and repair costs. Komanoff champions funding subway repairs with congestion pricing and performing repairs as soon as possible. Rosenthal’s position is that before any money is spent, we must reform the MTA’s bidding practices and outrageous construction costs. While no consensus emerged, the discussion provided the audience with plenty of information, stimulation and food for thought.

Of course, education is only the first step in addressing these issues as citizens. The next is finding ways to effect change — to drag our subway operatives into the 21st century. The city’s riders have suffered too long and been disappointed too many times. In January, Governor Andrew Cuomo handpicked transit wunderkind Andy Byford to rescue the city’s subways and buses and appointed him president of New York City Transit. On May 22, Byford presented his “FAST FORWARD” plan. It lays out two successive five-year programs that will install modern switching systems on most of the subway’s lines, upgrade 150 stations, equip 50 stations with elevators and buy 650 new subway cars. They also include overhauls on how the transit system buys equipment, hires contractors, negotiates with unions and manages big projects. Most transit insiders welcomed the plan, but Cuomo’s response was tepid, and de Blasio took months to even meet with Byford. Byford’s plan is costly but thoughtful — and is essential to the well-being of this city. We mustn’t allow it to die on the vine.

The Democratic Club will push the MTA, the city and the state to do the right thing and finally treat their transit customers with the respect they deserve. I urge you to join us and help us make a big noise about the MTA and other pressing issues for our city and our nation.

Nancy Felice Lang is /// of the Four Freedoms Democratic Club.